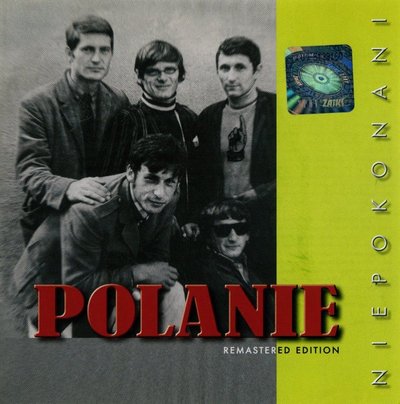 "These guys need no introduction to '60s Eurobeat aficionados. Well, to some of them this is the only worthwhile garage band from Poland. Since the inclusion of their tracks on "Too Much Monkey Business #2" and "Psychedelic Super Pjotr", their only LP has become a collectable among '60s fanatics. Formed in the summer of '65, they were the first Polish all-stars band consisting of members of the charttopping Czerwono-Czarni and Niebiesko-Czarni. Later that year they managed to record two EP's filled with mellow r&b/pop and wild instros. The breakthrough came with The Animals' tour of Poland in November '65 where Polanie were the support act. Two weeks together made the band veer towards more aggressive sound. Eric Burdon left the guitarist and vocalist Piotr Puławski tapes with original black blues and British r&b otherwise unavailable in Poland at the time. In early '66 as the second Polish band (after Niebiesko-Czarni) they were allowed to tour behind the Iron Curtain, with gigs in Scandinavia and West Germany. In Hamburg's Star Club they again met Burdon who offered them to join The Animals for gigs in the UK. The great opportunity was missed as the guys didn't go, allegedly for passport-related reasons. In the act of artistic venegance upon the regime they started to play really tough by '67. In October they recorded for their only LP and another EP. The album's A-side features Polish-sung originals and the B-side is consisted of covers."